Army fatigues, tents and helmets nearly filled the basement of Ray Montgomery’s childhood home. Born with a creative imagination, finding military gear in the home led to hours of fun for Ray. At that age, he was unaware of the sacrifices people in the military made for their families and country. All he knew was people in the military fought to protect the country, and his father would probably have to fight if war broke out.

Although Ray’s father told him about his experiences in Vietnam and Bosnia, war did not affect Ray until his father was called to fight in Desert Storm. Ray was a sixth-grader and had little knowledge of the conflict in Iraq. He remembers the 24-hour news coverage of the war and worried if his father would return.

Ray’s brother also served in the Army, completing six tours in Iraq and Afghanistan from 2004-2017. Having both his father and brother serve gave Ray a sense of pride, and he realized that he, too, wanted to serve his country.

Unfortunately, Ray was unable to follow in their footsteps. In 1997, he lost his sight in a random shooting when his car was stopped at a railroad crossing. In an instant, Ray’s life changed. He was left with so many questions. Would he be able to live independently? How would he earn a living?

Nationally, people who are blind or visually impaired face a 70% unemployment rate, a reality Ray learned while struggling to find work after losing his vision. Though rehabilitation helped him learn to walk with a cane, read Braille and use a computer so he could live independently, it was difficult to find a job. He soon found himself depressed. “I needed purpose and direction,” he said.

After moving to Indianapolis, it didn’t take long for him to find direction through the help. “Although I had never heard of Bosma, my vocational rehabilitation counselor informed me the organization not only provides rehabilitation services similar to those I received in my hometown but also is the state’s largest employer of people who are blind or visually impaired,” Ray said.

He applied for and was offered a job working on Bosma Enterprises’ glove packing line. Since then, Ray has steadily advanced through the ranks, serving as a marketing activity associate, a service support associate, and now, outreach coordinator.

In his current position, he assists in the coordination of all internal and external events and social media. Without your support, creating opportunities like Ray’s will not be possible in the future. 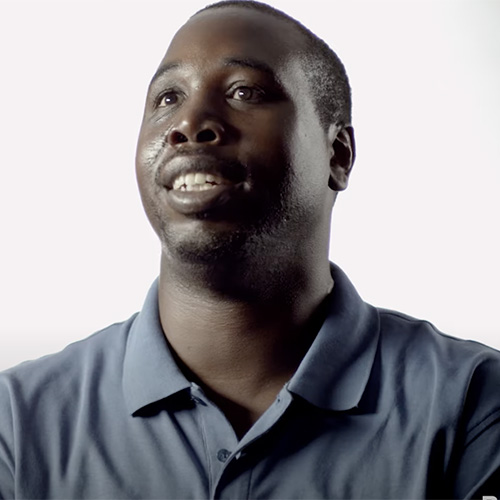 Your one-time or monthly gift will directly benefit the programs that provide independence for Hoosiers who are blind.