Bosma helped Rhonda navigate her blindness with confidence and gave her the opportunity to have a successful career.

Rhonda walked into her office, still shaken. Driving to work that morning, she had a close call on the road and was nearly sideswiped – a truck had appeared seemingly out of nowhere.

Rhonda sat down and switched on her computer. It was another busy day at the clinic where she worked, and she had plenty to do. But she struggled to find the cursor on her computer screen.

That’s when she knew. Something wasn’t right.

“Things were off – really off,” she says.

Rhonda was quickly diagnosed with pseudotumor cerebri. A buildup of fluid pressure was destroying her optic nerves. Within 10 days, Rhonda went from being a busy, active, professional mom – to being completely blind.

Rhonda’s sudden and dramatic vision loss sent everyone reeling. Rhonda broke down, grieving that she wouldn’t be able to see her children any longer or even the grandchildren she hoped to have one day. Her husband Eddie felt helpless. Her sons were protective and confused. When many of Rhonda’s closest friends seemed to disappear, unsure of how to relate to her anymore, she had a realization.

“I felt like I had to prove to the world that Rhonda was still here and vital,” she says. “I really wanted the world to know I was still as good as I was. I just have to do things a little differently.”

Rhonda started at our rehabilitation center soon after losing her sight. There she learned how to navigate blindness with what she describes as a “can-do attitude.” She learned practical skills and also discovered her support community.

“They gave me the feeling of belonging,” she says. “I had a nexus of people I could talk to – who understood. I learned so much and opened up so much more. I became bolder and more confident.”

She still remembers the empowering feeling of making her way alone through the busy streets of downtown Indianapolis, armed with the new mobility skills she learned at Bosma Enterprises.

“They really taught me how to navigate the world in my blindness, and that is freeing,” she says.

When Rhonda finished her rehabilitation, she was ready to get back to work, but it was difficult to find a job. After a five-year job hunt that was equal parts frustrating and degrading, she got an opportunity at Bosma Enterprises.

She started out as a temp, packaging health and safety gloves at our warehouse, and she still has great memories of that beginning.

“It was so much fun,” she says. “The people were so vibrant. We had a family community.”

Since then, Rhonda has worn many hats at Bosma Enterprises, and she’s had the opportunity to use her many talents. Today, she manages the Independent Living Store and represents us as a United Way torchbearer. Rhonda also tells her story through participation in the Toastmasters network. She’s already won several awards for her speeches.

“I feel honored every time I’m asked to go out and represent Bosma in the community,” she says. “It really makes a difference, because when you’re faced with blindness or vision loss, and you can see someone who is thriving, and they say 'you can do the same' – it makes all the difference in the world.” 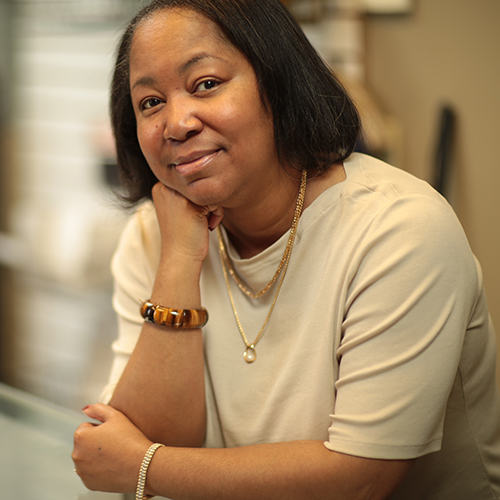