Diagnosed with a rare degenerative eye disease as a teenager, Mark spent his young adult years wondering what a life without vision was going to look like.

Today, Mark works in the global headquarters of Eli Lilly and Company. Before coming to the Bosma Center for Visionary Solutions, Mark was an underwriter for a finance company, had a bachelor’s degree in communications and fully intended to get his master’s degree. But as his eyesight worsened, he realized he would have to make some changes to his plans and think about retiring as an underwriter. About that time, the stock market collapsed, forcing the company to close his division, and he found himself out of work.

“I refused to cry ‘Why me?’ when the reality was ‘Why not me?’ What makes me any different than anybody else? Why shouldn’t I have to deal with difficulties?” he said, recalling his feelings about his diminishing sight and job loss.

A friend told Mark about Bosma, but it took three years for him to feel emotionally ready to take the next steps and move his life forward. If you ask Mark how a person who is blind or visually impaired gets to where he is today, he would probably say it all starts with hope.

“The renewal of hope was one of the greatest things Bosma gave me. When I went through vision rehabilitation, I was committed to learning all the skills they could teach me so that I could attack life again and reacquire my independence and my passion for things like reading. I confess there were times when I wasn’t sure how to move forward but they helped me refocus. They turned my glimmer of hope into a flame that became a bonfire,” he said.

Mark remembers meeting others who were going through the same journey. “Because of your disability, you tend to live a very solitary life. Then you find yourself sitting in a room with 10 or 12 people like you and you realize that the questions you have are their questions. Your fears are their fears. You feel their understanding, support and solidarity. It galvanizes you, and you realize you are not as alone as you thought,” he explained.

After completing the program and while working with other clients, his martial arts instructor approached him about a temporary job opportunity at his place of employment. Mark was intrigued and submitted his resume. 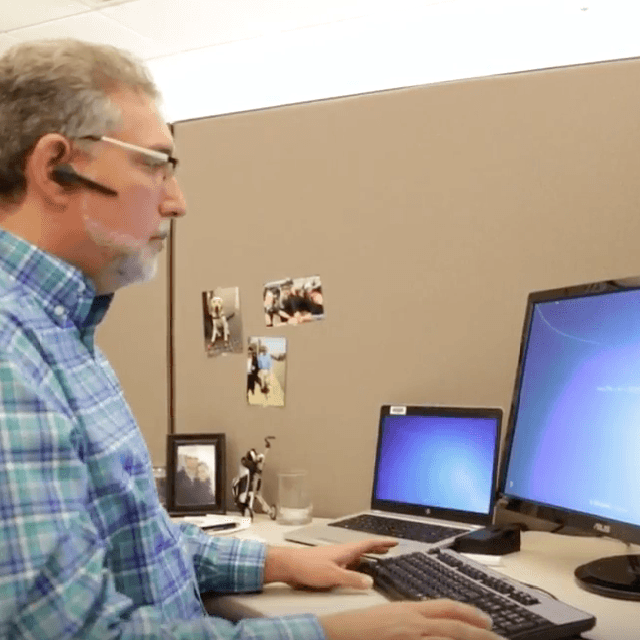 What would life be like? Mark always wondered after he was diagnosed with a genetic disorder that would take his eyesight.

In August 2015, he was hired by his instructor's employer, Eli Lilly. The following February, he became a full-time employee. “My title at Lilly is senior specialist, which includes a wide variety of job duties. I do a lot of writing, oversee publication deadlines, follow up on milestones for outsourced projects … I guess I shortstop a lot of things,” he laughed.

After just two years with Lilly, Mark started taking on more spokesman and leadership duties. He is chair of the Working and Living with Disabilities Employee Resource Group, which allows him to exercise his love of public speaking in presentations promoting diversity, inclusion and employing people with disabilities.

Mark wants corporations to feel less afraid and become more proactive in being inclusive in their workplaces. His objectives are to elevate awareness to action and to be a voice for those people who, as yet, don’t have a voice.

“I want to say to others, the real success of Bosma is when somebody goes through the program and comes out feeling like a whole person again. Look what’s possible. If I can do this, you can do this,” he said.

“The renewal of hope was one of the greatest things Bosma Enterprises gave me."